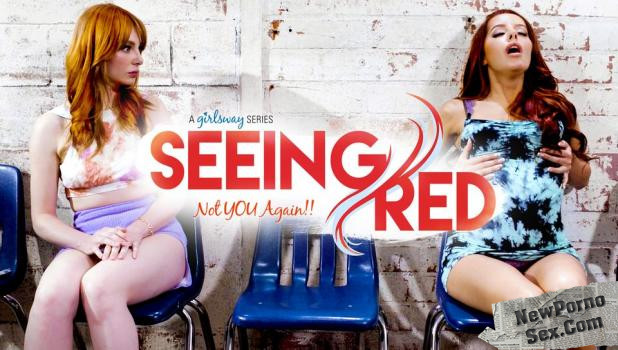 Lacy Lennon & Vanna Bardot - Seeing Red: Not YOU Again!!
Released: October 21, 2021 Lacy Lennon is sitting in a folding chair. She's concentrated on a sheet of paper that she's holding and looking at, mouthing words as she reads for a bit and looks away from it. She is memorizing lines, clearly about to audition for something. Lacy looks up and sees that Vanna Bardot has just arrived, holding her own sheet of paper. The way the ladies are looking at each other indicates that they clearly don't like each other. 'Ugh, not YOU again!!' Vanna says with distaste... As the ladies trade barbs and talk about past acting-related snubs and triumphs, it becomes clear that they are long-standing rivals, who are often at the same auditions whenever the part calls for a redhead. Talk naturally segues to the topic of today's audition. This particular part calls for a redheaded lesbian who will be doing some simulated sex scenes. They both seem very confident that they will win the part. The ladies resolve to compete to see who can deliver a better simulated sex performance, both of them agreeing that 'anything goes!' They start the competition by seeing who has the best love-making sounds. Both ladies are turned on by the other's sounds, but neither admits it. They then move on to see who can give the better on-screen kiss. This causes them to get even more turned on, but they still don't admit that to each other. Looking for an excuse to get closer to each other now, they decide to see who can pretend to eat pussy the most effectively. But before long, their simulated pussy-eating naturally begins to segue to the real thing. There's no acting involved in how much these ladies are enjoying each other's hot bodies! GirlsWay.21.10.21.Lacy.Lennon.And.Vanna.Bardot.1080p.mp4
Size: 1516 MB | Duration: 38 min | Video: 1920x1080, 5630 kbits/s, 23.98 FPS | Audio: 44100 Hz, ‎191 kbits/s