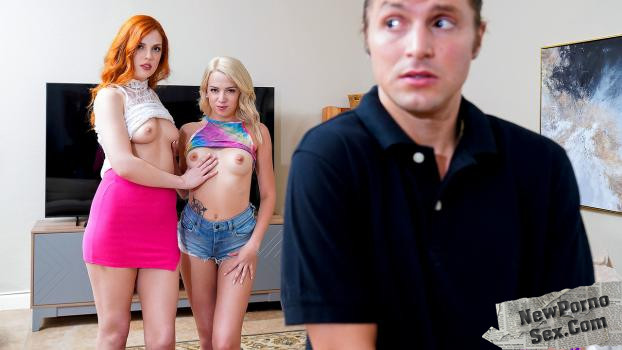 Madison Summers & Scarlett Mae - Release Those Demons In A Healthy Way - S1:E4
Released: March 22, 2022 Jay Romero’s stepsister, Madison Summers, is hard enough to have in the house since she’s hot and not putting out for him. When Jay’s dad starts dating a younger lady, Scarlett Mae, things get even more awkward for Jay. He can’t stop being hard in his own home, so he’s doing an awful lot of beating his own meat. Scarlett is getting sick of cleaning up Jay’s messes, so she and Madison confront Jay mid-wank. Jay tries to deny everything, but the girls wrestle the pillow he’s used to cover up away and Madison winds up with a handful of her stepbrother’s dick... Although Madison initially runs out from the awkwardness of the situation, she’s open to talking about it when Scarlett brings it up later. The girls conclude that it’s harder for guys to get it on with someone else than it is for girls. They agree to work together to help Jay by showing him their tits and giving him a handie to milk his cock. Putting plan to action, Scarlett calls Jay in and tells him to drop his pants. He does as he’s told reluctantly, then turns around even more reluctantly. While Jay’s back is turned, the girls pop their titties out. They start rubbing each other’s breasts down while telling Jay to jerk it. Just watching Jay stroke that cock is such a turnon that the girls decide they’ll need to abandon the original plan and fuck him. Confused but ever obedient, Jay goes to the couch with his dick in hand. The girls descend upon him to blow him together, licking the balls and deep throating the shaft with equal enthusiasm. Scarlet claims the first stiffie ride in reverse cowgirl as Madison laps Scarlet's boobies. The girls swap spots so that Madison can enjoy Jay in cowgirl. The girls make Jay earn his keep as they create a pussy buffet for him to feast on, and then things really get wild as Scarlet gets on her back so Jay can fuck her as Madison rides her face. Madison collapses on top of Scarlet in a lesbian 69 that lets Madison lap at Scarlet's twat even as Jay gets behind Madison to do her in doggy. The position is perfect for Jay since he can tap Madison's twat and then pull out to dip his dick into Scarlett's mouth. When he can't hold back from cumming any longer, Jay pulls out to cover Madison's butt and snatch in his jizz to create a mess that the girls are for once eager to clean up. YoungerMommy.22.03.22.Madison.Summers.And.Scarlett.Mae.XXX.1080p.mp4
Size: 1599 MB | Duration: 34 min | Video: 1920x1080, 6601 kbits/s, 29.97 FPS | Audio: 44100 Hz, ‎195 kbits/s