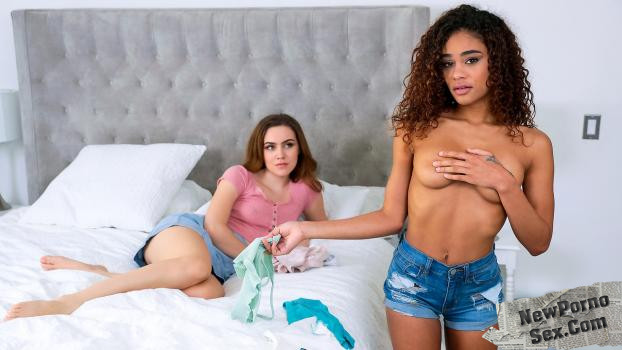 Freya Parker & Scarlit Scandal - Sleepovers Arent For Sleeping - S5:E8
Released: March 24, 2022 Scarlit Scandal has recently broken up with her boyfriend. To take her mind off of things, she invites her friend Freya Parker over for a sleepover while her parents are out of town. When Freya arrives, the girls go to Scarlit's parents' bedroom where the bed is big enough for the girls to share. Scarlit wants to take a moment to change into something more comfortable for girl talk now that Freya is here. She's a bit surprised when Freya encourages her to get changed right there in the room, but eventually she lets her friend have her way. Curling up on the bed, Freya listens as Scarlit talks, playing the sympathetic friend perfectly... Once Scarlit has finally dished about her breakup, Freya makes her move. She comes in for a kiss that takes Scarlit a little aback. Although she wasn't expecting this from Freya, Scarlit finds that she likes it very much. She likes it even better when Scarlit moves lower to pull up her shirt and go to work licking her tight titties. When Scarlit gives in to her attraction to Freya, she gives in completely. She gives Freya's breasts some serious attention, palming them and then leaning close to lap the nipples to hard peaks. The girls help each other undress, and then Freya shows Scarlit how girl on girl action really works. Kneeling behind Scarlet, Freya places one hand on her friend's boobs and the other on her clit, working her into the beginning of a sexual frenzy. When Scarlit is all revved up, Freya lays her down on the bed and uses her fingers and tongue to really finish the job. Throbbing with the delight of her first lesbian climax, Scarlit decides to put what she's learned to work. She gets Freya on her knees so she can explore Freya's juicy twat with her tongue. Lapping her from end to end is just the beginning; eventually Scarlit settles in to really tongue Freya's fuck hole. Freya gives Scalrit another round of delight as she gets on her back and pulls Scarlit on top of her. Guiding Scarlit up her body, Freya eventually gets her BFF at the perfect spot so she can lick and suck Scarlit's clit. She keeps her tongue in constant motion until Scarlit's hips are bucking in delight. Scarlit once again returns the favor. Since Freya is already on her back, it's simple for Scarlet to get between her thighs and lift Freya's hips to the perfect pussy munching height. From there, all that's left to do is put her mouth back to work as Freya guides her with her breathy mewls of pleasure to leave Freya as replete as she is. GirlsOnlyPorn.22.03.24.Freya.Parker.And.Scarlit.Scandal.XXX.1080p.mp4
Size: 1484 MB | Duration: 30 min | Video: 1920x1080, 6967 kbits/s, 23.98 FPS | Audio: 44100 Hz, ‎195 kbits/s