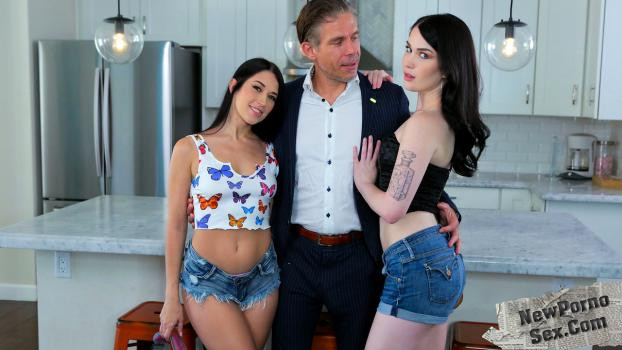 Alex Coal & Evelyn Claire - Yes Daddy - S40:E16
Released: November 12, 2021 Mick Blue has been acting as a sugar daddy to two girls who each think they're the only one. He has decided it's time for them to meet. He tells both girls to come to his place for a surprise. Alex Coal arrives first and goes right in for a kiss. Mick doesn't hold anything back as he squeezes that ass. A moment later, Evelyn Claire also walks through the door and Mick greets her with the same enthusiasm. Alex and Evelyn are properly confused until Mick clarifies that they are each other's surprise. Both girls have expressed a desire for a threesome in the past, so Mick thought he'd get them together and make all their dreams come true... In spite of their surprise, Alex and Evelyn seem pretty into the idea. Mick tells the girls that they have a dinner reservation and they have 15 minutes to get ready, so they bounce to the bedroom to get acquainted with one another while also getting dolled up. By the time Evelyn and go in search of Mick in their dinner outfits, the girls are fast friends who are super hot for one another. One look at those two hotties and Mick decides that they're staying in for the evening. Both girls are okay with that. Instead of inserting himself into the action right away, Mick encourages Alex and Evelyn to show him what they can do. The girls are thrilled to show off, feasting on each other's mouths and then tugging their dresses down so they can take the time to lap and caress one another's tight tits. Gradually working their way down to their knees while devouring one another, Alex and Evelyn eventually tug Mick's pants down to unveil his stiffie. That becomes the center of their attention as they demonstrate that they can share beautifully. When Mick relocates to the bed, the girls keep up their BJ and ball sucking. They can't get enough of that hardon, even as Evelyn lays down to really gargle Mick's balls while Alex climbs on top of her to deep throat Mick's dick. Eventually, Alex turns around so she can rub down Evelyn's pussy an create the makings of a lesbian 69. Evelyn does indeed get to lick at Alex's most tender bits, but she has to share with Mick, who slides on home to fuck Alex in doggy. When it's Evelyn's turn to enjoy the D, she finds herself cradled against Alex's thighs as Mick lifts one of her thighs high in the air to really drive home. Going deep, Mick gets Evelyn moaning loud and long. When Mick gets on his back, Evelyn helps Alex get into position for a stiffie ride. As soon as she has made sure Alex is getting happily fucked Evelyn climbs on top of Mick's face to ride his tongue. Evelyn eventually finds herself on her back with Mick spooning behind her. Eager to remain involved, Alex gets between their thighs, sucking Mick's balls and lapping at Evelyn's clit. Alex eventually gets another turn on her back, this time with Evelyn doing whatever she can to help her new friend feel incredible. Mick can't hold back another moment. He pulls out to jizz all over Alex's body, leaving a gift for Evelyn to lick up and snowball with Alex so she can swallow it. NubileFilms.21.11.12.Alex.Coal.And.Evelyn.Claire.Yes.Daddy.XXX.1080p.mp4
Size: 1851 MB | Duration: 35 min | Video: 1920x1080, 7427 kbits/s, 23.98 FPS | Audio: 44100 Hz, ‎196 kbits/s