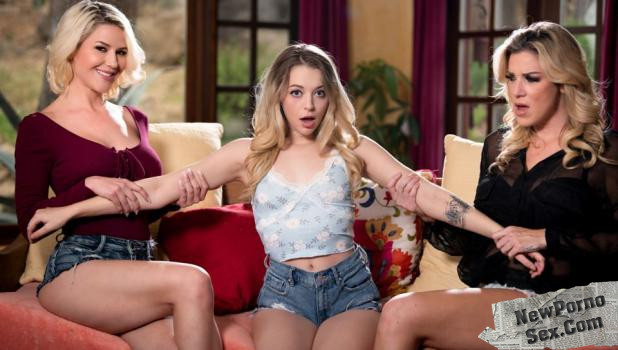 Kit Mercer, Kayla Paige & Lily Larimar - She's My Darling Girl!
Released: November 13, 2021 Kit Mercer is spending some quality time with her stepdaughter, Lily Larimar, although it's clear from the way she eyes her up that shehas the hots for her. Unfortunately for her, they are interrupted by Kayla Paige as she waltzes into the house unannounced. WhileLily is pleased to see Kayla, who is another stepmom of hers from a past marriage, Kit is annoyed by Kayla's presence. Like Kit, itseems Kayla has the hots for Lily and neither of them want to give her up. Tensions are high as Kit and Kayla try to outcompete each other for Lily's attention. Lily grows upset and tries to interrupt but isignored. Things get even more tense when Kayla tries to convince Lily to move in with her, which upsets Kit. That's when they getcombative, each trying to declare that they are the superior stepmother to Lily. As the argument intensifies, it's clear that the stepmothers aren't taking Lily's feelings into consideration! They both take her armsand play tug-of-war with her, and Lily becomes distressed as she's yanked back and forth like a ragdoll. Finally, enough is enoughand Lily demands that they stop. She thinks their OBVIOUS sexual attraction to her is the source of stress. In a desperate bid tobring about peace, she offers herself up sexually to BOTH stepmoms to show that there's enough of her for both of them! MommysGirl.21.11.13.Kit.Mercer.Kayla.Paige.Lily.Larimar.1080p.mp4
Size: 1344 MB | Duration: 38 min | Video: 1920x1080, 4986 kbits/s, 23.98 FPS | Audio: 44100 Hz, ‎191 kbits/s