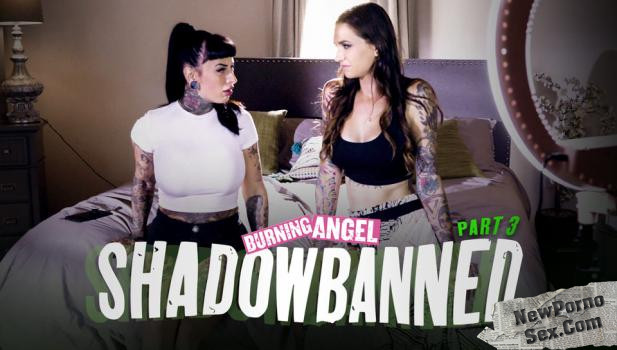 Maddy May - Shadowbanned - Part 2
Jessie Lee & Rocky Emerson - Shadowbanned - Part 3 Cady (Rocky Emerson) is reeling from Regina's sudden disappearance and calls on her followers to help her figure out what's going on. Cady is convinced that Jamie Jane is somehow connected to everything that is happening and is determined to find her. Just as Cady is posting her plea for help, Gretchen (Maddy May) walks in. Cady tries to convince her that something seriously weird is going on, but Gretchen is skeptical. Just then, Gretchen's date, Codey Automatic (Dante Colle) arrives. Codey is one of Gretchen's new followers and does robot dances online. Gretchen suggested that they make a robot dance together in honor of Regina. As Gretchen and Codey film the robot dance in Gretchen's room, it doesn't take long for things to get hot and heavy between them. Meanwhile, Cady thinks she's finally figured out what happened to Jaime and Regina...but can she save them?? ------------ Cady (Rocky Emerson) thinks she may have figured out the source of all the recent strange occurrences. As she ponders her next move, she suddenly hears a terrible scream coming from the bedroom. She nervously goes to investigate. When Cady walks into the bedroom, all the lights are flickering. Something is clearly amiss. Sensing a mysterious presence in the room with her, Cady addresses Jamie Jane, telling Jamie that she knows where she has disappeared to...and how to bring her back. Cady goes on to explain that she has arranged a group chat with some of Jamie's fans and has a plan. Taking a deep breath, Cady enacts her plan. As Cady and Jamie's fans work together, Jamie (Jessie Lee) suddenly materializes. Cady is stunned as she realizes that not only has Jamie returned, but her online presence has too! Jamie is elated to be back and grateful to Cady for her help. Jamie decides to show her appreciation to Cady, and they come together for a hot kiss, their perfect bodies grinding against each other. Looks like Jamie's already making up for lost time! BurningAngel.21.10.31.Maddy.May.Shadowbanned.Part.2.XXX.1080p.mp4
Size: 1327 MB | Duration: 32 min | Video: 1920x1080, 5842 kbits/s, 23.98 FPS | Audio: 44100 Hz, ‎191 kbits/s BurningAngel.21.11.14.Jessie.Lee.and.Rocky.Emerson.Shadowbanned.Part.3.XXX.1080p.mp4
Size: 1262 MB | Duration: 32 min | Video: 1920x1080, 5480 kbits/s, 23.98 FPS | Audio: 44100 Hz, ‎192 kbits/s